Jordan. The ancient city of Petra.

Jordan. The ancient city of Petra.

Petra – a place that attracts with its unique atmosphere and ancient secrets. The unique symbiosis of architecture and natural features appears as a unified ensemble in color and texture. Hidden in the caves of a legendary city at the intersection of ancient trade routes, the wonders of Petra offer a dive into a mystery that still plagues the minds and hearts of both scientists and fans of wonders.

Petra – the legend, the journey to which for centuries remained only a dream, but today is available to anyone wishing to immerse themselves in the most amazing labyrinths, which have preserved the secrets of two thousand years ago. It is one of the most recognizable UNESCO heritage sites and one of the Seven New Wonders of the World, a true treasure of Jordan – and the world. In ancient times, Petra due to its unique location in the middle of the grueling trade routes between the seas has become a legend. The former capital of Idumea and Nabatea, lost in the sands with the decline of overland trade, now draws more than a million visitors a year for a reason. Petra is a miracle even in our days.

The Roman columns of the Great Temple Complex in Petra

Petra is a unique city – an architectural ensemble of caves, streets, tombs, crypts, palaces, temples and other buildings carved into the steep cliffs, inscribed into the dry riverbed and the natural amphitheaters. Petra has facades reminiscent of Roman classics, ornate columns and intricate bas-reliefs that look like extraordinary works of art. This is an oasis in the desert and a real treasure trove of ancient examples of architectural solutions, with amazing subtlety blended into the natural rock massif.

The secret and lost city has given birth to many legends of countless treasures and the Holy Grail, which many travelers over the centuries have tried to find. After the Romans and the loss of its importance by the trade routes, Petra remained only a legend until it was rediscovered in 1912 by the cunning, deceit and considerable courage of the legendary orientalist Burkhardt. This Swiss was the first person in modern history to persuade the nomads to open to him the way to the legendary city covered in mysteries. The Wadi Musa desert has since become a full-fledged tourist pilgrimage. 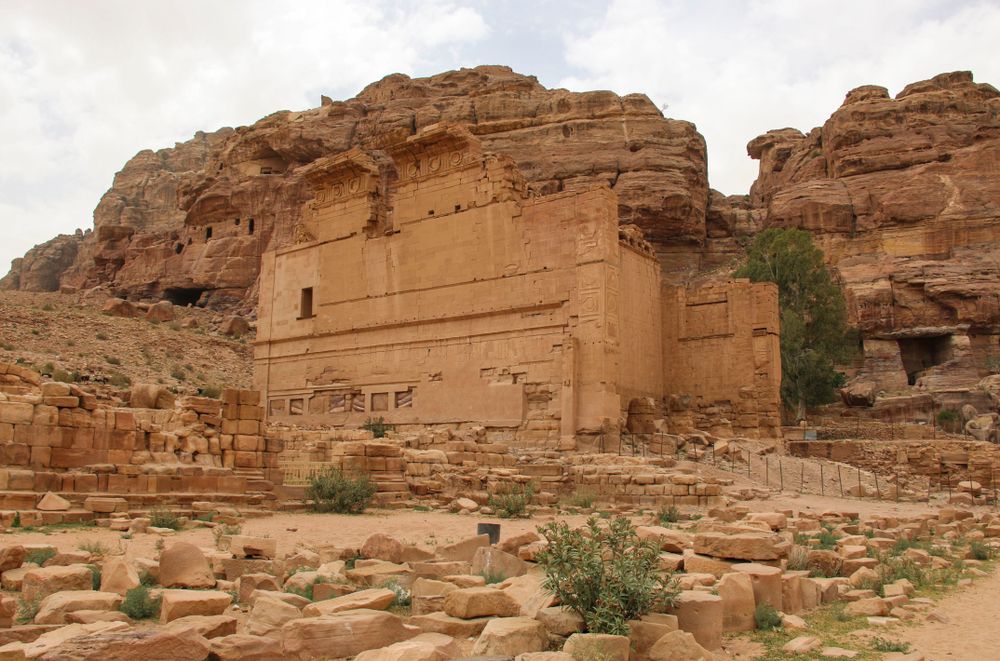 Petra – a phenomenon, the exact story of its origin has not opened anyone. The “newest” buildings are no older than 6th century AD.э. The first of these, however, were discovered about two thousand years before Christ.э. (if you believe the results of modern analyses and scans). There is simply no authentic data and facts about Petra: no one can say anything definite about this unique place and the mystery of its origin. Even today, no more than a third of the labyrinths and caves hiding behind the opulent facades of Petra have been explored. Buildings and corridors are revealed daily, adding several more pages to the four-thousand-year history of the phenomenon. 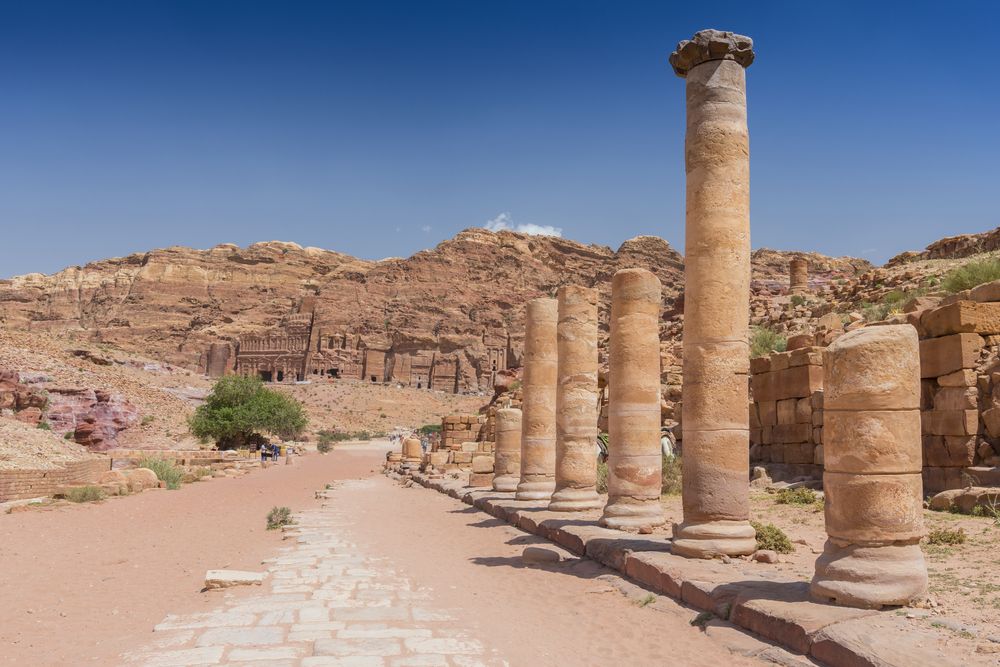 Columns standing along the Roman paved road in Petra

There are many theories about the origins of Petra. But most concerned scholars agree that Petra was first discovered and inhabited by the Idumeans, and flourished already inhabited by the Nabataeans – the tribes who settled in this rock city after centuries of nomadic life in the desert. At various times, the legendary city has belonged to the Romans, Byzantines, Arabs and Crusaders. The architectural treasures of Petra – the consequences of the conquest by Rome. And the Bedouins were the last to call it their sanctuary.

The Bedouins are long gone from the labyrinths of Petra, displaced by politics and commerce, which have made Petra a real tourist gem. But their workmanship can still be admired today. In fact, unique jewelry and sand bottles are staple souvenirs from Petra for any visitor. And everyone can ride camels and learn more about the Bedouin culture. The original inhabitants and peoples of the desert were evicted from this unique place to make it a real gem of the desert and one of the main tourist complexes of Jordan. 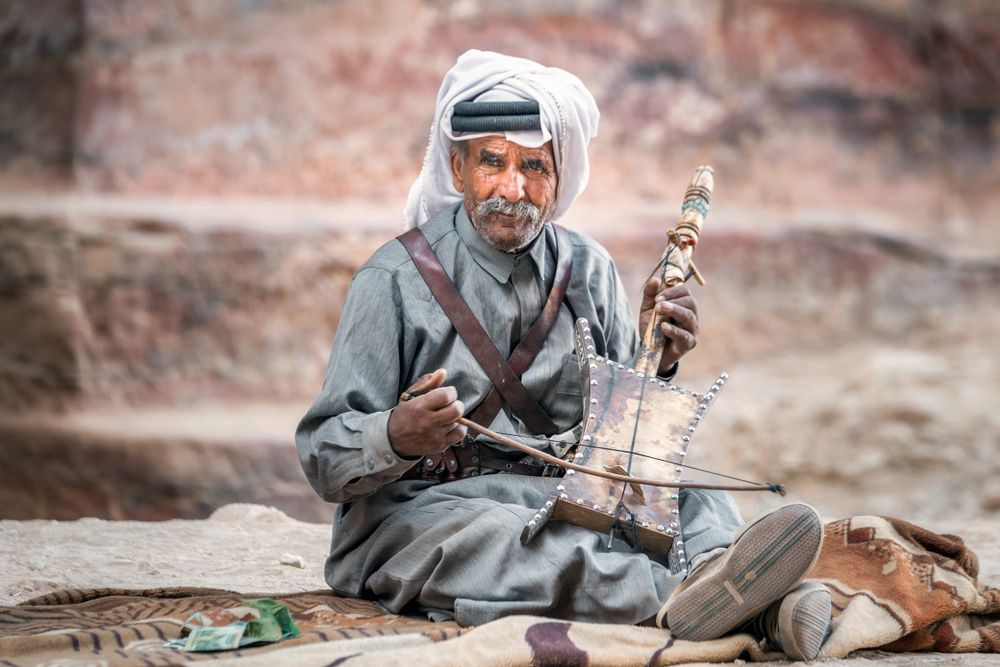 Portrait of a Bedouin in Petra

St. Peter’s was astonishing long before its arrival. After all, even the way to the Treasury is a special adventure. The road to Petra is like an invitation to walk from darkness to light, from dark ages to enlightenment, experiencing one of the most stunning contrasts. The gloomy, morose and for many people terrifying gorge Siq, with its narrow passageway between rocks that almost close in altitude, is stunning not only because of its depth. To get to Petra, you have to descend 80 meters into the ruins of sandstone, plunging into darkness under the oppressive weight of the Nubian rocks. In this gloomy kilometer walk, on horseback, on foot, or in a phaeton, it is as if the line between fiction and reality was blurred. And the wild, gloomy gorge prepares for the wonder that comes after – the incredible shades of pink that play on Petra’s masterfully carved sandstone facades. 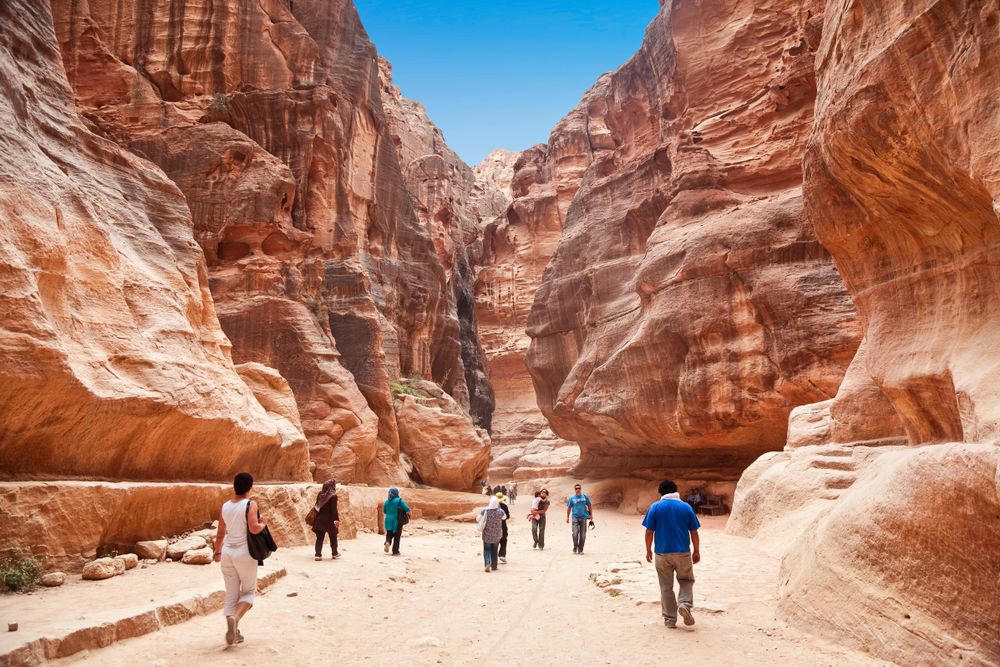 The picturesque way to Petra through the gorge Siq

The most famous – and most striking – in Peter is still today the facade of the Treasury. El Khazneh – the first thing that opens Peter’s gaze. The subtlety and skill of the carving there rivals that of any masterpiece from the Hellenic era. Roman facades carved into the rock are the first thing you see after exiting the Sik Gorge. But they are not the only treasure of Petra. Expanding almost unexpectedly, the natural amphitheater reveals thousands of crypts and the main street framed by a colonnade. The labyrinths, caves and corridors transformed by masters, have a lot of surprises. Unique waterholes and baths providing water in the middle of the desert, a system that amazes even today. 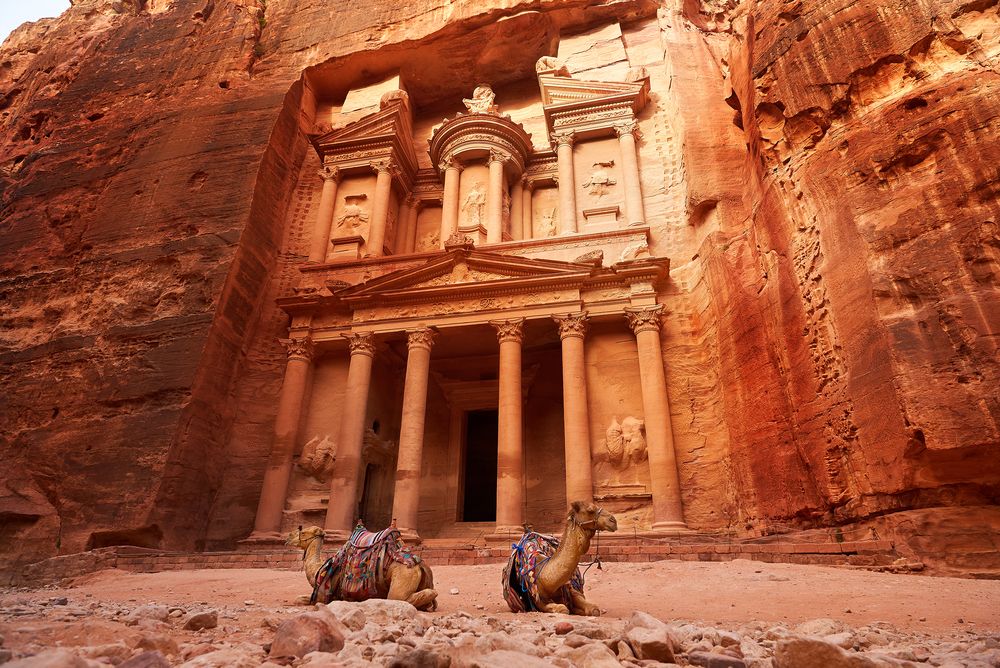 El Khazneh, one of Petra’s most important and recognizable landmarks

One of the most recent discoveries is the tomb of an ancient ruler hiding on the upper floors, which was discovered only by scanning. Merging into united ensembles, connected by striking terraces and levels, the houses create an amazing maze that you want to wander through endlessly. From the ancient amphitheater to the ruins of the legendary Ad Deir Monastery, the hills and valleys of Petra hold much to be seen. One of the unique “highlights” of Petra is rightly called the crematoriums and tombs. 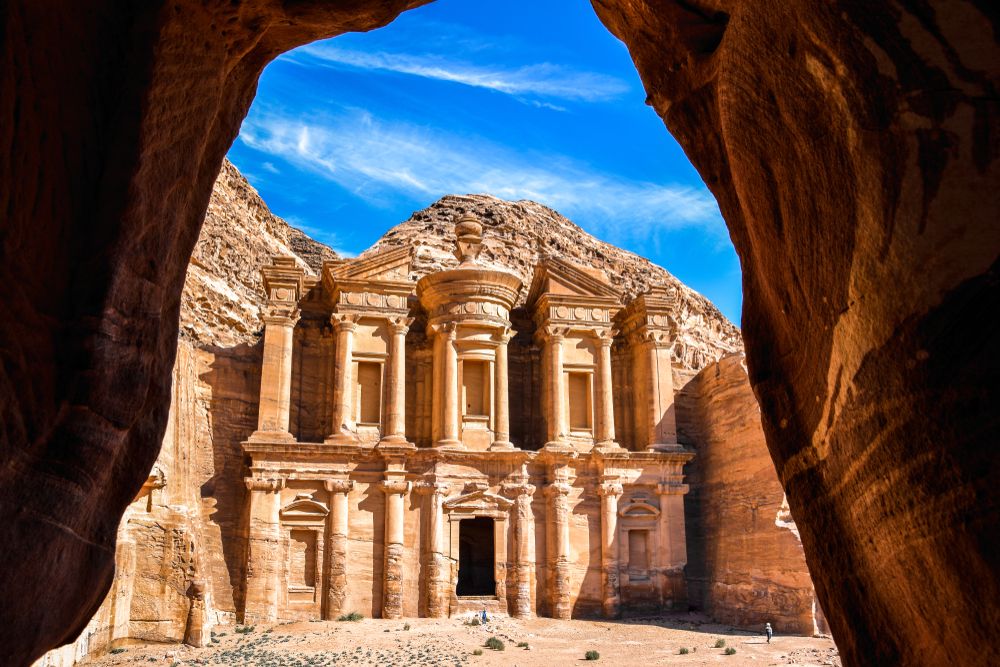 Ad Deir, a temple built in the 1st century B.C

It is no accident that Petra is on the list of iconic places to visit. But if many of the classic sites on tourist maps can be explored and “uncovered” in a day, you need to devote at least a weekend to Petra. To understand, learn and marvel at this amazing wonder in a few hours is simply impossible. The minimum time to start discovering the treasures of Petra is not accidentally considered to be 2-3 days. Even during the day, Petra only hints lightly at its charms. You can fully appreciate the rocks and carvings only at dusk and in the soft light of candles at night, which light up the colors of the unique rocks in a new way. 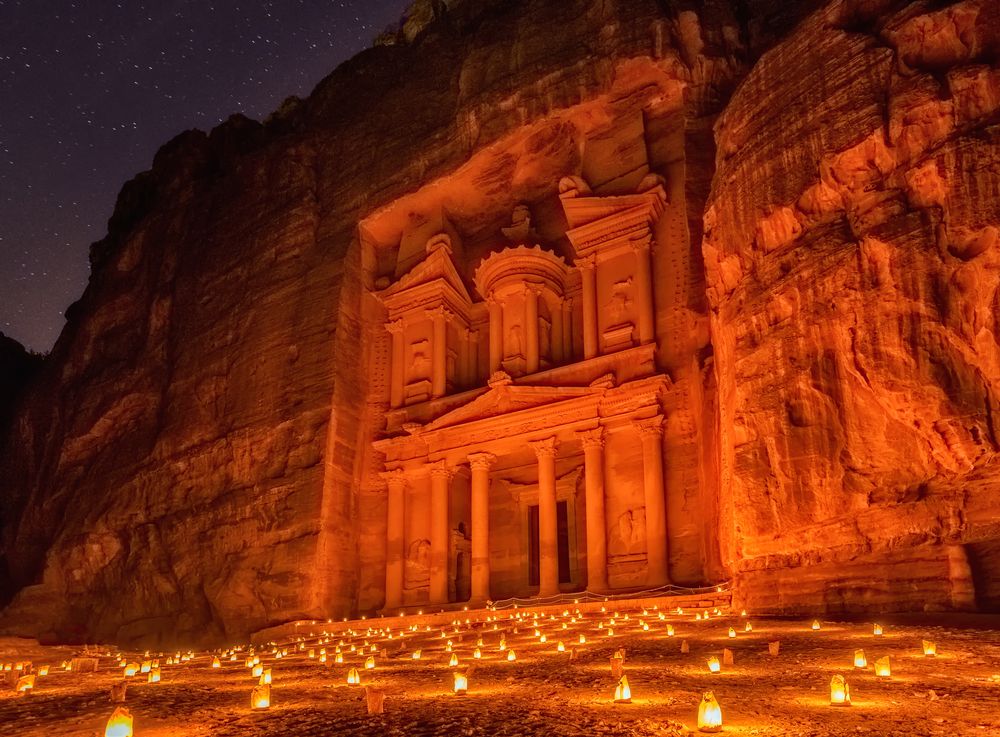 A night view of Petra

Displaying all the hues of ochre and pink, revealing the richness of the red sandstone color palette, Petra is an insoluble mystery. Everyone who visits this wonderful place, leaves a piece of his heart in it and forever becomes one of the hundreds of thousands of pilgrims who seek to solve the miracle of Petra.