The Lena Pillars in Yakutia

The Russian writer, Byronist Alexander Bestuzhev-Marlinsky, once saw the Lena Pillars and said that he was inspired by the sacred silence. It feels like a soul in touch with the wild and powerful nature. Indeed, the Lena Pillars are one of the most beautiful places in Russia, and thousands of tourists want to visit them every year. Eight years ago, the famous rocky pillars were added to the UNESCO World Heritage List.

Lena Pillars in Yakutia – a place full of inspiration and silence

Yakutia has managed to preserve carefully the miracle of nature on its territory. The Lena Pillars occupy a grandiose location – they are on the Lena River near the Khangalassky Ulus. The cliffs are built on a huge area of 80 thousand hectares and stretch over a length of 220 kilometers along the river. The inhabitants nicknamed this place the "Lena Pillars National Park. Tourists can see similar cliffs on the Buotama River. Many tourists associate the majestic Lena Pillars with a medieval castle, dragon's fangs and even giants.

The story of the origin of the rocks 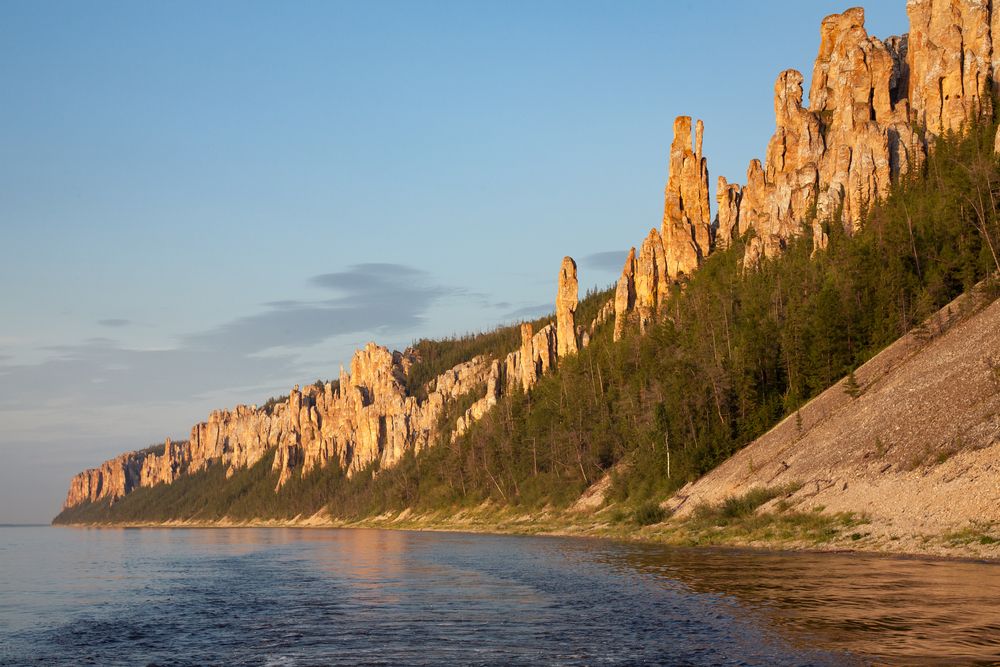 The rocky shore with the Lena Pillars

Historically the stony rocks were the bottom of the ancient sea long ago, but because of climatic and geological changes the sea disappeared, and the rise of the Siberian plate occurred about 550 million years ago. As a result, limestone was accumulated, which led to the formation of rocky formations. It took 200 million years for the rocks to get that familiar look for tourists because of wind and precipitation.

Legends of the Lena Pillars

The mighty Lena Pillars are considered a place steeped in legends and tales, passed down from generation to generation. The locals believe that the place is inhabited by a big sasquatch. In his hands he carries a bag of animal claws and food. At times, the unusual inhabitant frightens foolhardy and rude tourists, but to kind and honest travelers lost in the forests and mountains, he helps them find their way. 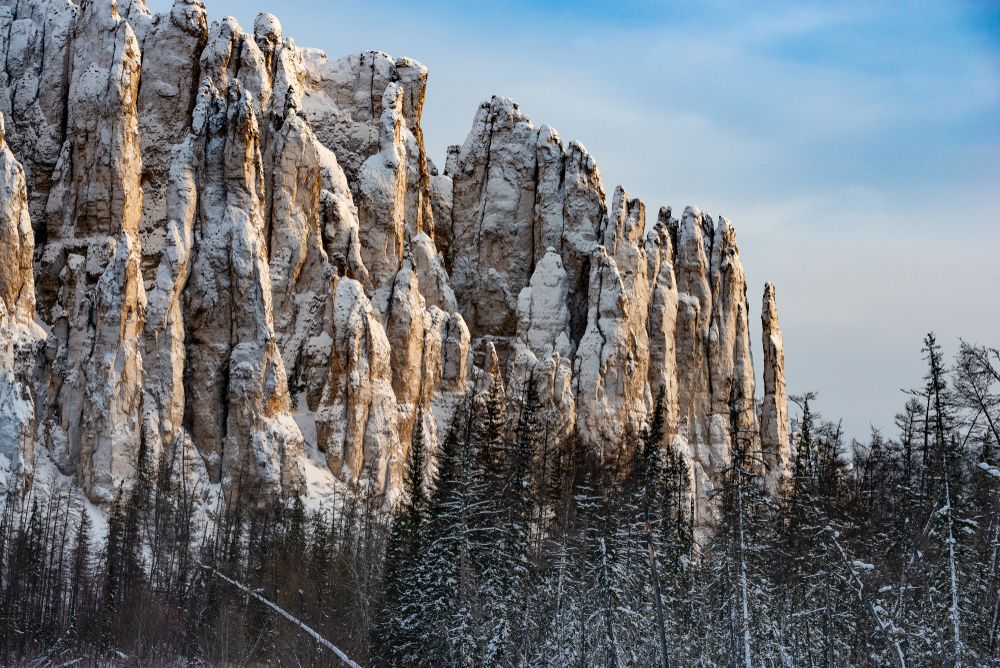 Under the cover of snow the sight looks no less beautiful

According to the second legend, the dragon was an ancient inhabitant of the Lena cliffs. He held the locals in awe, and on the days when the Lena River left its banks, he would get angry and ask for tribute (by animals) from the residents. Once a dragon, seeing a girl of incredible beauty, took her into his domain. Her fiancé could not put up with it and went to fight the dragon. He defeated him, but the dragon's possessions had a powerful power and turned the girl and boy into stone rocks. The inhabitants of Yakutia consider the Lena Pillars a symbol of love, reliability and courage. The locals have a belief that the frozen rocks are the ancient gods who were punished for misbehaving. Hence the name "Turuuk Hajalara," which in the local language means "Mountains of the gods who have risen.".

The "Lena Pillars Lena Nature Reserve" became a popular place for tourists and scientists over 20 years ago. The national park attracts not only rocks, but also flora and fauna. This is a habitat for rare birds and animals. Many animals are listed as rare species in the Red Book. A part of the reserve is covered by the Middle Taiga forests with over 450 species of plants. For example, scientists found rare plants in the area: the narrow-grass endemic, Radovschia dioeca. Tourists can see a fox, a brown bear, a roe deer, a sable, a sable. The musk deer (a small animal similar in appearance to a deer) is an indigenous species rarely seen in other regions of the country. And over the Lena Pillars fly 100 species of birds. The golden eagle is one of the main hosts of the territory, its power can be seen from afar. 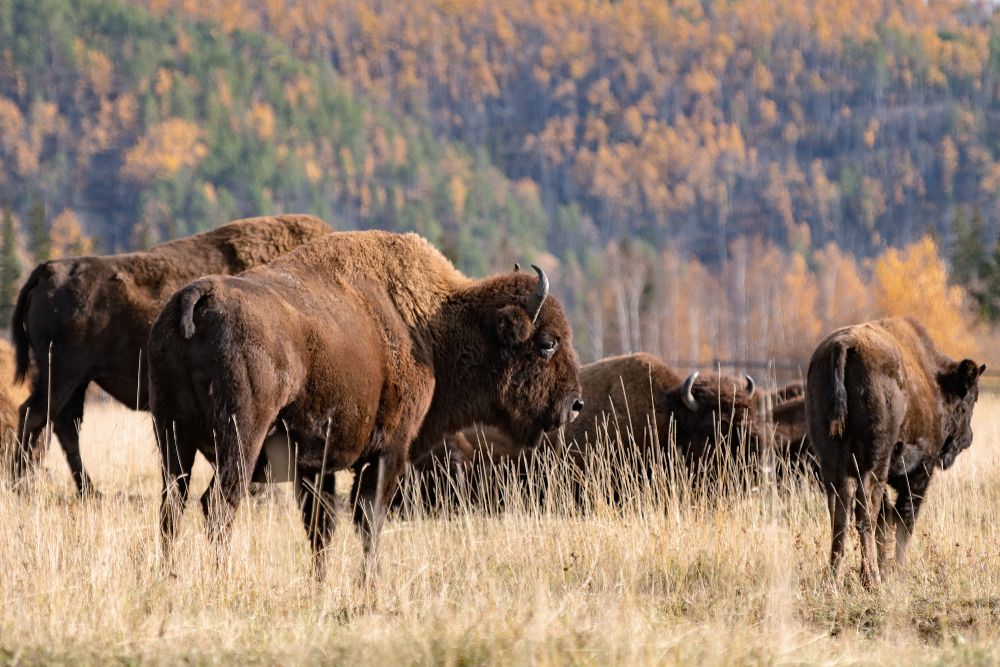 A herd of bison in the Lena Pillars Nature Park

Tourists come to the Lena Pillars on a two-day tour to get a feel for the unusual atmosphere. A visitor can see a panoramic view of the nature of Yakutia on the observation deck 100 m high.

The national park's climate is not mild. It is characterized as sharply continental. Temperatures in winter can drop to -60 degrees Celsius. In summer the thermometer can show +35-40 degrees Celsius. The sharp differences in the area of the Lena Pillars are caused by the location near the mighty Lena river. Locals advise tourists to visit the park in the summer and fall, because in winter it is cold to travel.

How to get to the Lena Pillars

To get to the capital of Yakutia – Yakutsk. It takes 7 hours to fly from Moscow to Yakutsk. The time difference is +6, so it will take you almost a whole day to get there. 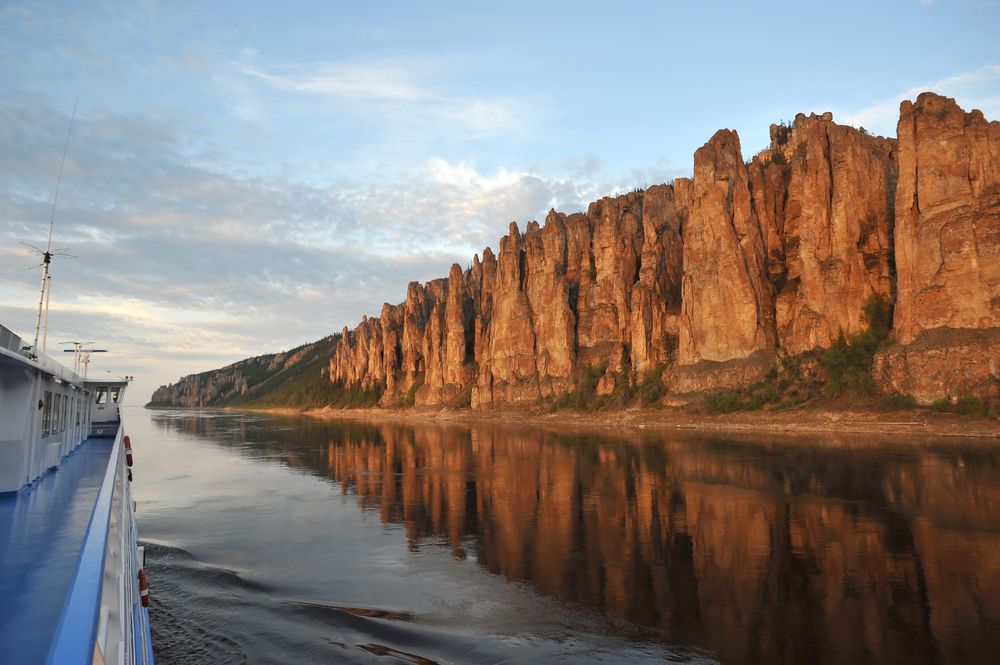 View of the Lena Pillars from a motor ship

The most practical way to get to the Lena Pillars is by water. For example, in summer tourists travel by boat, motorboat and speedboat. In winter it is safer to go by car or snowmobile. Tourists are offered two routes: a long way and a fast way. Long way (walking around the rocks by paths and stairs) is suitable for children, older people and tourists who do not like extreme. The fast road is extreme, you have to climb up the cliffs.

1. Tourists are advised to take mosquito suits in summer, as sprays do not help against mosquitoes and midges.
2. After the rains you have to climb carefully up the rocks, because it is slippery and difficult to go up.
3. To explore the area, it is best to take comfortable shoes and clothes.

The Lena Pillars will suit any traveler, as they are believed to be a place of strength and rebooting. "The Majestic Wars" are mesmerizing in their beauty and allow one to touch a powerful age-old history.